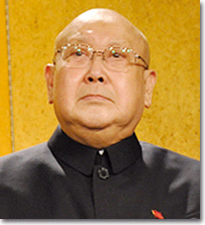 Mr. Shang Changrong, the president of China Theatre Association, the guest professor of both the National Academy of Chinese Theatre Arts and Shanghai Theatre Academy, is an undisputed leading Peking Opera artist in China. Mr. Shang is the first batch of successors of national intangible cultural heritage, and twice winners of “The National May 1st Labor Medal”.

Born in 1940 in Beijing, Mr. Shang Changrong is the third son of Peking Opera master Shāng Xiǎoyún who is among the “4 great Dan actors” in China. Shang was exposed to art as a child by his family, making his debut at the age of 5. His unremitting personal efforts and the strict supervision of his father and his great teachers such as Chen Furui, Su Lianhan, and Hou Xirui, combined with his courageous exploration on the stage, have gradually made him the best-known Peking Opera performing artist (painted face）. He is especially reputed for his excellent voice control and passionate action. The masterpieces include: “Lian Huan Tao”, “Farewell to Concubine”, “Li Kui Visits His Mother”, “The Legend of Li Kui, a warrior called black gale”, “Reconciliation Between the General and Premier”, “Wild Boar Forest”, “The soldiers and people in Yan’an” etc.

However, Shang does not just repeat traditional Peking Opera methods, he’s also able to organically integrate the modern cultural psyche into his performances, while maintaining strict adherence to formula and standardized techniques. Proficient in singing, dialogue, acting, acrobatic combat, he endows his performances with new understandings and techniques, thus vividly reveals the inner world of the characters performed from many different approaches. In 1988, Shang joined the Peking Opera House of Shanghai and began to star in such historical operas as “Cao Cao and Yang Xiu”, “Zhen Guan flourishing age”, “Upright and honest official Yu Cheng Long”, known as the “trilogy of Shang Changrong”. These productions have gained overwhelming success and won almost all the important prizes in Chinese theatre field. In 2009, the “Upright and honest official Yu Cheng Long” was invited for the third time to be staged in Beijing in the 60th anniversary of the founding of New China.

Shang’s endeavor has paved the way for the contemporary Peking Opera art, and is highly reputed in Chinese theatre circle. In 2002, he becomes the first winner of the Plum Blossom Grand Prize, a special award for the artist who won the prize for the third time. Up to now, only 4 performers have won this grand prize. In addition, Mr. Shang Changrong consistently works on the inheritance and popularization of Peking Opera, he, along with other artists, has brought excellent Peking Opera performances to many places of China and such countries as America, Australia, Japan, to name but a few. He also weighs importance in the cultivation of new theatre performing talents and has over 20 disciples at home and abroad.