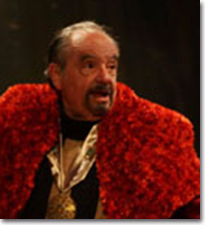 Born in Bogota on December 20, 1928. He is an actor, playwright, theater director and teacher, one of the great rhetoricians and practitioners of the contemporary scene.

He trained as an architect at the National University of Colombia in the School of Fine Arts in Paris and the Venice University Institute. Santiago Garcia began actor training in Bogota with the Japanese director Seki Sano in 1956. He studied stage design and theater management at Charles University, Prague (Czechoslovakia), between 1959 and 1962.

In 1958 he integrates the theatre of The Owl, where he directed A la diestra de Dios Padre, from a novel of Enrique Buenaventura. In 1966 he founded a group of artists and intellectuals, the House of Culture, the first stage of what would become in 1968 the Teatro La Candelaria, which he has been its chief executive from 1966 to today.

Master of collective creation, his way of understanding it rejects the method and approaches it as a work process that is renewed in every experience and that settles transdisciplinary knowledge and an attitude of practical and ideological commitment in each member of the group. Each installation is conceived as an exploratory process, a technique and a different form of compelling improvisations, to identify motivations, to explore the reality and the artistic fabric of nonverbal language, gesture, intertextuality and polyphonic discourse.

His works recreate episodes of the Colombian sociopolitical history and have faced the artistic language through the manifestations of structural violence, the problems of the lower classes, habits and customs of the oligarchy, a deep commitment to popular culture and artistic procedures emanating from the investigation of the sources and specific language of the theater.

Santiago Garcia has received numerous awards nationally and internationally, like the Ollantay Prize of the Latin American Theatre Creation and Research (CELCIT) and several honorary doctorates, honors recognizing his artistic stature and ethics, humanism and commitment to the Latin American intellectual condition.