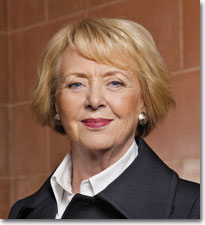 Vigdís Finnbogadóttir, the fourth president of Iceland, was the first woman in the world to be elected a constitutional Head of State. « President Vigdís », addressed on a first name basis according to Icelandic tradition was first elected in 1980 and subsequently re-elected three times before deciding not to stand again in 1996. During her period of office, President Vigdís devoted herself to the cultivation of the identity and integrity of the nation: its language, its distinctive culture. Youth and education being among her major concerns, she was a founder member of the « Save the Children » Association in Iceland. In 1997 she received special recognition from the Icelandic Language Foundation for her active support of the Icelandic language during her time as president of Iceland. She was also honoured with the Jakob Letterstedts Award for furthering the cause of Nordic cultural heritage.

Acclaimed for her important contribution to environmental issues in Iceland such as reforestation and land reclamation, Vigdís Finnbogadóttir received the special Land Reclamation Award in 1996. A dedicated spokesperson for human rights, she is also an honorary life member of the Women’s rights Association in Iceland. The former president also represented the Nordic countries in a series of important events entitled «Scandinavia Today ». Beginning in 1981 these took place in the U.S.A., Japan, Russia and South America.

Vigdís Finnbogadóttir has been made Chevalier dans l’Ordre des Palmes académiques, an honorary distinction conferred by the French Ministry of National Education, Research and Technology, and has received honorary doctorates from many universities in France, the USA, Canada, Finland, Sweden, the United Kingdom and Japan.

Theatre, literature and languages were the three main orientations in Vigdís Finnbogadóttir’s education. After leaving Reykjavík College she studied French at the University of Grenoble and later French philology in Uppsala. Following studies in literature and drama at the Sorbonne in Paris her increasing interest in the theatre led her eventually to Copenhagen to study theatre history. Back in Iceland she rounded out her education taking degrees in English and French literature and education.

Teaching, hosting arts programmes on television, developing and running a training course for tourist guides, and directing a major theatre company were the rich and varied professional activities that preceded Vigdís Finnbogadóttir’s election to the Icelandic presidency in 1980. Returning after completing her studies to teach French at Reykjavík College she also built up the French department in a new experimental school in Reykjavík while at the University of Iceland she taught French drama and theatre history. It was, however, through her hosting of arts programmes and presentation of French lessons for Icelandic State Television that Vigdís gained national fame and popularity.

Her intense love for the theatre still as strong as ever, Vigdís was a member of the first experimental theatre group to be established in Iceland. In 1972 she was appointed director of the Reykjavík Theatre Company (Leikfélag Reykjavíkur), later the City Theatre, a post she held for eight significantly successful years, giving particular attention to Icelandic playwrights. From 1976-1980 she was a member of the Advisory Committee on Cultural Affairs in the Nordic countries.

Though she left the Presidency of Iceland in 1996 Vigdís Finnbogadóttir remains active in public life. She has the Chair of the newly founded International Women’s Leadership Council.
On 28th October 1998 she was appointed « UNESCO Goodwill Ambassador for Languages » and will be specifically working in cooperation with UNESCO for the defence of linguistic diversity and the promotion of pluri-lingual education.

Vigdís Finnbogadóttir was born on April 15, 1930, in Reykjavík, daughter of Finnbogi Rútur Thorvaldsson, a professor of civil engineering and Sigríður Eiríksdóttir, a pioneering leader of the nursing profession.