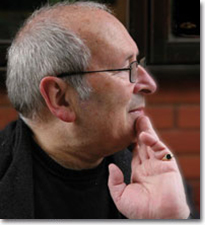 Arnold Wesker, F.R.S.L., born London 1932, has written over 43 plays the most well-known being The Wesker Trilogy, The Kitchen, Chips With Everything, and Shylock,most of them performed worldwide.

He has written two opera librettos, published volumes of fiction and non-fiction, poetry, a book for young people, and an autobiography – As Much As I Dare (1992). His work has been translated into 16 languages.

In the last seven years he has written five new plays and other works, including his first novel, Honey, published by Simon & Schuster 2005.

In 2008 he published his first volume of poetry All Things Tire of Themselves. In that year he also completed a commission from BBC World Service for a radio play, later adapted for the stage – The Rocking Horse Kid.

Wesker’s vast archives have recently been purchased by Texas University.

A recipient of honorary degrees and prizes, he was knighted in the 2006 New Year’s Honours list for services to drama.